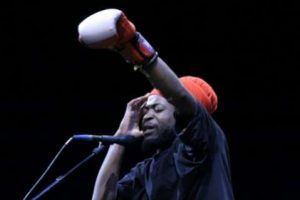 My work focuses on the way human beings understand social, cultural and political realities, and the way they respond and interact with the news media. My work combines art and science. I use new technologies and work across various mediums including video, audio. I design interactive devices and installations.

As an art researcher I am interested in exploring how people relate to each other, things, concepts, religion and language. In my art performances and installations art, I try to analyse the similarities, contradictions and differences in the ways we perceive space, sound and vision. Further, news media plays an important part in many of my work as it often feeds into a constant fear which is spread around the world, in trade, immigration, rumours of wars etc.

My work’s aim is not to solve the world’s problems but just to provoke the visitors or audience to think about these things such as crime, corruption, discrimination etc. New technology in my work normally  adds functions which I can’t realise with traditional techniques. For example, in my installation ‘See-Saw’, I researched the implications that news media have on society by using motion detectors to translate the participants’ movements into images that they are confronted with.

The installation analysed how human relations and how the media impact each them. To do so, I built an installation based on the well known childrens tool found at any playground. However, instead of the two people facing each other, the seats were placed with the backs towards each other, emphasising (dis)trust and lack of visual coordination. Both participants faced a computer screen, displaying sounds and images according to a composition which was based on the way they moved on the seesaw (as captured by the motion sensors). If they moved steadily, they would see live images of each other – if they moved uncoordinated, they would be confronted with heavy images from the international media, blurred speeches and sounds of Political protest.

As a musician, sound is ever present in my art work. It also plays an important role in addressing psychological, emotional feelings. For instance, in the development of the ‘rotating speech’ installation, I have spent many days researching the world’s important political speeches and statements and the effect and implications they have on the media. For a spoken word performance during the Gebbles political discussion session at the Royal Conservatory in the Hague, I developed the political instrument ‘glove’ as a sound interface which manipulates the speeches and sound.